• $1 trillion and counting — Jack Bogle’s legacy to investors: Robin Powell has been interviewing Eric Balchunas, a Senior ETF Analyst at Bloomberg, who followed Bogle’s career closely for many years. Balchunas is the author of The Bogle Effect, which assesses the impact that Bogle has had, both during his lifetime and in the years since his death. So, what is Jack Bogle’s legacy? And what was he like as a person? (Evidence Based Investor)

• Is This a New Bull Market? A ray of light has been shining through the dark clouds of inflation. And with that, stocks have come back to life. The median stock in the Russell 3000 is up 33% from its 52-week low, with energy and healthcare leading the way. (Irrelevant Investor) see also Stock gains since bear market lows: Netflix: up 99% , Roblox: up 66%, Coinbase: up 65%, Nvidia: up 62% (Jon Erlichman)

• This Changes Everything for Hedge Fund Managers: “The higher the cost of money, the lower the competition,” says Avenue Capital’s Marc Lasry on the risk-free rate.  (Institutional Investor)

• How Much Income Do You Need to Be Rich? Based on the 2019 Survey of Consumer Finances, what are the top 10%, top 5%, and top 1% of household incomes in the U.S.? We take a high level overview of how much income the highest earning households make so that you can determine for yourself what it means to be rich (Of Dollars And Data)

• China’s Reopening Is the Boost the Flagging World Economy Needs: The easing of Covid restrictions will unleash pent-up demand for commodities, consumer goods and travel. (Businessweek)

• What Exactly Is Going On With Tesla? Dana Hull: In 2022, Tesla lost 65 percent of its value. Not shocking—a lot of big tech companies also saw their shares get decimated. But when the share price is down that [much], and it happens to be a year where Elon Musk also bought Twitter, and it happens to be a year when there’s just a lot of questions about what he is doing—is he really focused on Tesla or not?—the sentiment shifts, and so you’ve seen negative sentiment creep into the market. (Slate) but see also Big Tech Stops Doing Stupid Stuff: This year it might be smart to invest in companies that think a little smaller (Wall Street Journal)

• Why the scary, funny, profane ‘FAFO’ was 2022’s word of the year: 2022 was a year when people who did dumb or awful things (coups, tax scams, attacking smaller countries, making overinflated weed-meme offers for social media sites) would finally face some consequences. Can you do that? many asked during the Trump era. Could you just lie, cheat, swindle, funnel taxpayer dollars to your businesses, grab people’s genitalia with impunity? 2022 suggested that you couldn’t: “eff around, find out” was a bratty, satisfying way to reclaim the high ground. (Washington Post)

• Obamacare Is Everywhere in the Unlikeliest of Places: Miami. A decade after the Affordable Care Act’s federal health insurance marketplace was created, its outsize — and improbable — popularity in South Florida persists. (New York Times)

• Famous fans say farewell to the B-52’s: ‘They got me to question my own prejudices’: After 46 years, the Athens originals are taking off for good later this year. David Byrne, Boy George and more pay tribute to one of the most unusual pop bands. (The Guardian)

Be sure to check out our Masters in Business interview this weekend with Steven Klinsky, Founder and CEO, New Mountain Capital. Prior to founding New Mountain Capital in 1999, he was co-founder of the Leverage Buyout Group of Goldman Sachs, where he did $3+ billion of transactions before joining Forstmann Little as a partner, where he oversaw $10+ billion in capital.

Investors Most Underweight on US Stocks Since 2005 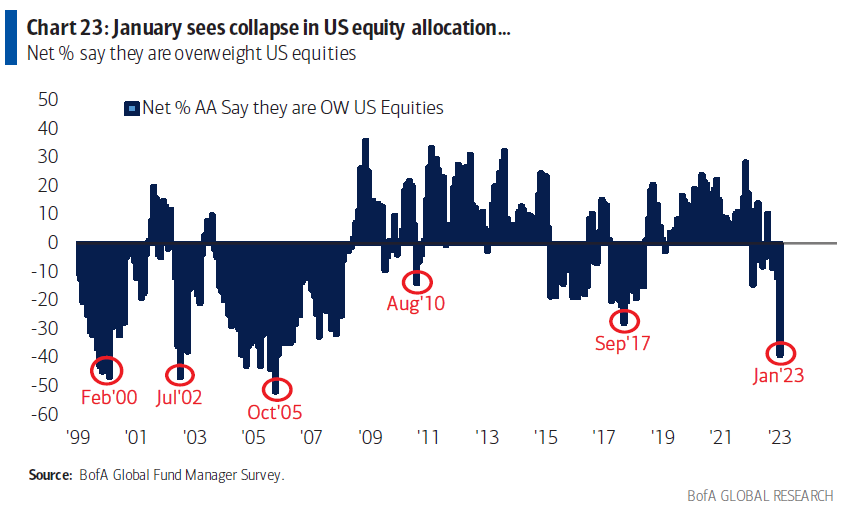