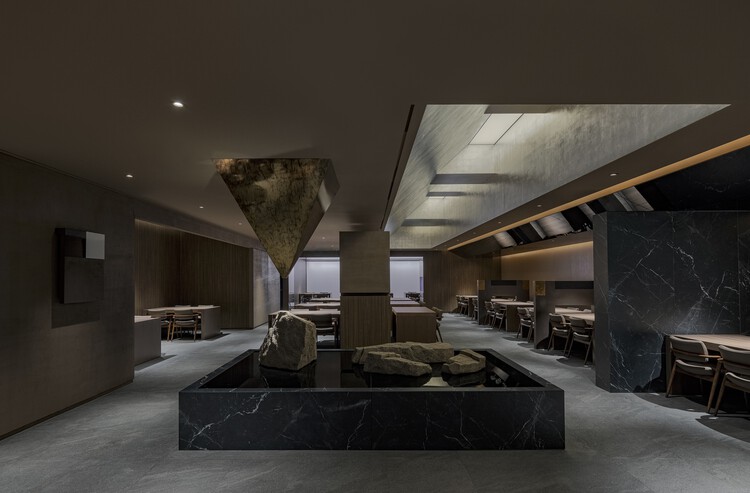 Text description provided by the architects. Designstudiominwoo* has created two spaces to feel differently under the concept of “TIMELESS MODERNITY,” which does not change over time. The world entering through two roads from the entrance is the same, but it gives a different feeling. The first hall space, which entered through the forked road, reflected faintly with the light falling from the high ceiling, imagining fog in the pond. A quiet stonework is located on the pond, creating an atmosphere of space. Objects with different physical properties made of triangular horns above them become the point of space. The second room space of the forked road is reminiscent of the light from the wall shining through the trees, expressing the beauty of soft light. The space composition of Otsu-seiromushi is largely composed of an entrance, a hall, a room, and a kitchen, and each created a different space scene.

In the facade, the reed’s quiet visual attention is drawn, and the light of the counter wall welcomes customers. The ceiling of the main hall originated from a different height from the existing space, but by utilizing this condition, the original architecture was attempted to be realized by expressing the geometric shape and ceiling facility structure as it is. Different ceilings for each hall space can have various synesthetic experiences from the perspective of customers who deal with the space. At the beginning of the interior, in order to give a point element, we tried to express quietness through the layout of the ceiling object and the artist Tae-soo Lee “stone composition.”

The finishing material of the wall expressed the naturalness of the material using warm-toned special paint, and in the semi-room inside the hall, wood material was used to give another spatial independence within the space. In the semi-room, the use of the front barrisol expressed minimalism. The central wall has a built-in table configuration that can look empty to increase the density of the space. Next, the hall in the room area was designed using the structure of the gable ceiling. Although the high ceiling of the space was utilized, the large scale of the hall area gave another spatial fun with the design. The center side is the same as the hall, and the works of artist Tae-soo Lee are arranged and used as a wide waiting space. The entrance wall creates an impactful space using a printed barrisol that expresses the concept, and the wood sheet is used to create a clean space to increase the unity with the hole and contrast it at the same time.

Rooms use high ceilings to create a magnificent space where light pours out, and express stability and privacy. Otsu-seiromushi provides various experiences for each scene of the space, but the lighting system creates various lights for each day, night, and season, so you can enjoy the fun of a rich space. Space follows classical aesthetics and tries to provide a sensory experience to focus on its original taste.