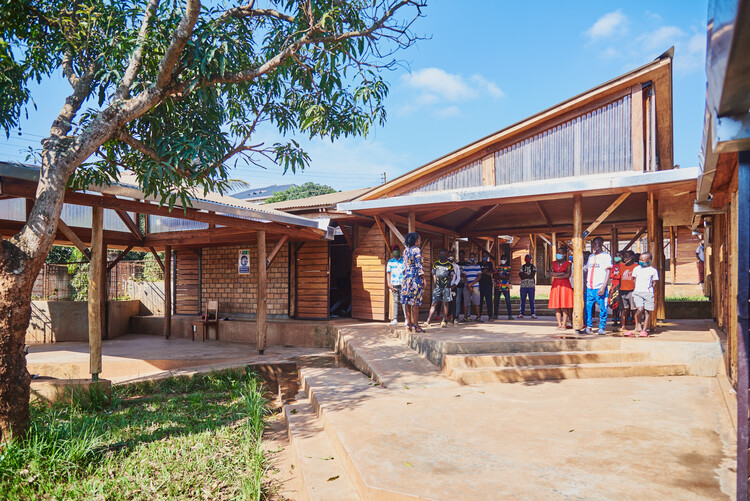 A Cluster of Complementary Units – The school was located at the outskirts of the Ugandan capital. The client is an NGO, who have been running TERAKOYA Primary Education as a project to support children who have lost their parents.

As the number of children in need of support increases, the school expands to build new classrooms. In addition to teaching children of different ages, academic levels and from different family backgrounds, the school also offers a wide range of activities such as dance and music, vocational training and counselling for caregivers. Therefore, instead of designing for everything that could be expected, we sought to create a space that would encourage open and spontaneous use, moments such as “Let’s have a class under the shade of a tree today”.

The site is located on a gently sloping hill with relatively small scale houses. It elongates from east to west and slopes along its longitudinal axis. We hope to create a bigger whole with the surrounding environment byde signing a series of small roofs that resonate with the scale of the surrounding neighbourhood. The ‘incomplete’ small units -too small to fulfil functions on their own- could work together to complement each other, absorb the gradient differences and create spaces that sometimes connect and sometimes separate.

The roof sits on top of a 5mx5m structure. The high side of each roof opens to create gables that receive light from two directions and extend to catch rainwater from the neighbouring low roofs. The five “classrooms”, which can be closed off by brick walls and fittings, are complemented by the neighbouring “terraces”- units which are only covered and open on all sides. The 23 seemingly random-arranged units are not just classrooms and terraces (inside and outside). Sometimes the classrooms become the wings of the central stage. Sometimes three units come together to form a larger connected room. The whole was completed by complementing each other functionally and environmentally.

The landscape is laid out on a 45-degree grid to facilitate relationships between the units. The eucalyptus log columns that support the roof structure are placed intentionally away from the four corners to invite flow into the rooms. This gesture creates a sense of connection not only between the two neighbouring huts, but also diagonally across the street.

The diagonals also evolve into a series of slopes each absorbing a 450mm level difference in the topography and create a zigzag movement across the site. They eventually lead to the external fence, and create a small space between the fence and the public road. The last hut straddles the external fence and provides a shaded space for the neighbours under its eaves. Rainwater collected from each roof is stored in the basement, with a pump installed to provide domestic water to the local residents- who then no longer need to go to the well at the bottom of the hill to fetch water.

In a region where many school construction projects are carried out on a temporary basis, this NGO has been steadily building relationships with the community through home visits. The small units, supported by slightly bent logs, have begun to come together to create a new place. We hope that it will grow to facilitate and symbolise the interdependent relationship between the community and the project.